When a group of Prince Hall Masons from North Carolina arrived in Cotonou, Benin last month for the inauguration of a new grand lodge in Cotonou, the cultural significance wasn’t lost on the masons from Benin.

After The American Revolutionary War (1775-83), a formerly enslaved man from Massachusetts who had fought in the war for independence, was attracted to Freemason ideals like brotherly love, justice, and liberty, but the exclusively white group wouldn’t allow a black man in its ranks. The man, Prince Hall, wasn’t one to take no for an answer, though.

With all the traditional tenets of masonry, he decided to start his own group of masons.

The group was granted a full charter in 1784 by the Grand Lodge of England and now has chapters all over the world, including in West African nations besides Benin, like Ivory Coast, Burkina Faso, and Liberia. Prince Hall Masons in West Africa number into the hundreds, though the organization would not provide an exact number of members. 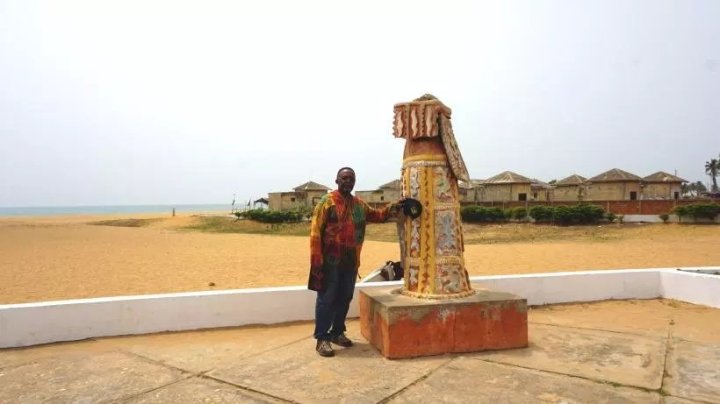 The inauguration of a Prince Hall lodge in Benin, where more than a million Africans, sold into slavery, departed the African coast, made the Masons from Benin emotional at the mention of it. But it wasn’t just the building. It was the fact that a delegation of African Americans had made the trip for the event.

A sect of Freemasons born out of the type of discrimination that had never been seen in Benin, yet which the Kingdom of Dahomey (now Benin) had indirectly sanctioned by way of its participation in the slave trade was now welcoming black Americans to Benin. To the Beninese masons, it was like a rare moment to right the wrongs of history.

“We have to welcome our brothers back. We want to say that we’re sorry for what happened all those years ago,” said Ismael Ogon, a French-speaking Prince Hall Mason from Cotonou. At the inauguration, sentiments like these were echoed over and over by the Beninese Prince Hall Masons.

A day before the inauguration event, the black American and Beninese Prince Hall Masons took a guided tour of the Slave Route in Ouidah (Route d’esclavages), a UNESCO-sponsored site of stops along the road where enslaved people walked to the port to be taken abroad in chains. The tour includes stops at sites like Place Chacha, where Africans were auctioned and branded with markers of sale before making the arduous walk to the ocean. At one stop, The Memorial of Remembrance, the group took a moment of silence for the enslaved people who died even before boarding the ships.

Cosmo Kenton, an American Mason, was moved by the the gravity of the tour, but he didn’t entertain any illusion about the significance of his trip. “It’s significant for me, but I can’t speak for anyone else,” he said while standing at the Door of No Return, a monument to the site where slave ships left port on the shores of the The Atlantic in Ouidah.

For Kenton, the beauty is in the symbolism of his “return” as a member of a group of black men that values freedom, integrity, and social service. But he’s not sure that outside of the circle of masons, the question of reconciliation for the evils of slavery between African Americans and Africans carries much weight to the average person on either continent.

With the rise of heritage tourism in places like Ghana, Benin, and Liberia, people of the diaspora who come to Africa seeking a genuine connection with the region of their ancestry sometimes encounter the reality that many people on the continent do not feel the connectedness of shared ancestry that people of the diaspora envision.

As of 2017, the Beninese government planned to invest $1 billion in tourism. The tourism sector would like to attract people who visit Benin to discover the cultural heritage of Vodun and natural sites like the floating village of Ganvié and Pendjari National Park, but is also looking into how to attract people who are interested in heritage tourism, according to Berenice Akinotcho, a communications specialist at Sémé City, the government-backed “international knowledge and innovation city.”

Most of the investment will come from private partnerships, according to José Pliya, the Director of the National Agency for the Promotion of Heritage and the Development of Tourism. Benin has already secured investments from the World Bank, the International Monetary Foundation, and partnerships with the African Parks Network and the Smithsonian Institution. The country, known as the birthplace of Vodun, plans to draw 700,000 tourists by 2021.

To that end, the government launched an open call in 2017 for proposals from entrepreneurs for ideas on how to improve Benin’s travel destinations. The winners of the challenge received $500,000 for the projects and an incubation period to develop their ideas at Sémé City.

It is true that without a DNA test, diasporans can’t be sure of exactly where they are from in Africa. Enslaved people in the United States mostly came from Senegambia and The Gold Coast (Ghana), while enslaved people from the Bight of Benin mostly went to the French Caribbean, Cuba, Trinidad, and Brazil. Centuries of cultural diffusion and genetic intermingling have shifted the people’s kinship so that Africans and black Americans are more like distant cousins than brothers.